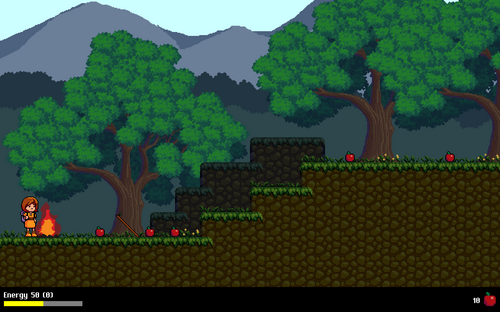 Here's the first Devlog into the game! The purpose of this Devlog is to reveal the game design choices that were made along the way. We are a fair way into it the jam now (just about midway) so a lot of choices have been made up to this point.

First was choosing what game to make!

We spent a lot of time considering 3 different ideas:
(1) An Alice in Wonderland type game where you played a girl collecting deadly toys in a strange environment. It was very American Mc Gee Alice inspired, but ultimately besides pretty visuals, I didn't have a strong core idea for this game.
(2) A futuristic space metroidvania where your character wakes up from cryostasis discovering her ship has crashed and that she is the sole human survivor in a space hulk full of weird alien life forms. The story of this idea was to me very compelling so one day I really might still make this one! However, besides it being another Metroid game, I wasn't doing anything new.
(3) Alchemist Mountain started as an idea of a shop girl trying to keep her father's business alive by retrieving the Philosopher's Stone from the top of a dangerous mountain. The story was simple but ultimately this one got chosen because it eventually resulted in me considering a "new" mechanic for the metroidvania genre.

Metroidvanias basically create restrictions to accessing the map in one of two ways. The first one is by items (think Legend of Zelda). Players need a fire wand to melt an ice wall, or flippers to swim, or claws to climb walls. The other way is by demanding player skill be built over time. This is classically Dark Souls. Turn left and the player will bump into a creature that will  smack you into spaghetti sauce. Turn right and they'll bump into five creatures that will do the same. Eventually though, after much spaghetti, you learn how to overcome these creatures and the world expands.

I came up with on odd in between idea. I call it an energy system.

In Alchemist Mountain, every day the player is allotted a certain amount of energy (also affected by the amount of food collected). Every action taken, be it walking , jumping, fighting, or gettting injured, consumes energy. In order to reach the next save point, the player must get better with their energy management. This is done by: getting familiar with the environment (where does the food spawn, where do the enemies spawn, and how to manage obstacles) as well as items (more damage means less energy on fighting, faster means less energy moving, etc. etc.)

On paper this looks like an interesting system. Does it work?

Well we are about to find out.

The game loop is almost complete at current point of writing:
(1) Wake up to eat food and gain bonus energy
(2) Traverse the world, avoiding enemies, picking up materials, and collecting food.
(3) Return to camp to craft new items.
(4) Go to bed.

Things we have thrown out to keep the core gameplay (the energy system) in focus:
(1) A health system (instead of losing health the player just loses energy. This is great as now there is a unified stat.
(2) A complex inventory system. Could actually help if it were fully fleshed out, but still would be distracting to players as they would have to figure out what to carry or combine etc. For the purposes of this game jam I have utterly simplified it to a per item specific limit that shifts focus to the excitement of crafting better equipment.
(3) A complex food system. Again this could be helpful, but for the purposes of the jam it has been reduced to a single stat that helps with the energy.

The way I make games is that I need a lot of visual feedback in the process (so very little programmer art) and that makes it tiring. Having now worked out even in this short time more than 100 sprites (animation frames consume much time). Working with two rather talented indiv. Daniel Docherty for music and The Seeker for sound effects.

Will keep everyone updated!